What is Dota 2 Console and Autoexec.cfg and Best Commands

Dota 2 Console and Autoexec.cfg and Best Commands to Use

Before I tell you what are best console commands, let me first share some basic information with you.

What is Dota 2 Console

Dota 2 Console is a window which opens in Dota 2 game just like command prompt in any windows. It allows users to add different commands to change anything related to Dota 2. You can add those commands via Dota 2 Console, or you can use them in autoexec.cfg file.

How to use Dota 2 Console

In old Dota 2 there was a long procedure to activate and use Dota 2 Console, but in Dota 2 reborn, its simple.

If we want to use lots of commands in our console, then its very difficult to type lots of commands each time we start Dota 2. So we can automate that process by adding a new file in our Dota 2 folder. That new file we add is “autoexec.cfg” and we add console commands in it. Each time game starts, this file automatically executes all those commands which are written in autoexec.cfg file.

You do not have to remove the quotation marks (“”) from commands

So, now you may ask, what are the commands that I need to add in autoexec.cfg. So you can see below, these are the best to use commands in Dota 2 and most of the commands are used by Pro Dota 2 players like Funn1k and Arteezy. If you want to their files, you can just download the autoexec.cfg files used by these pro players, or you can make a new file for yourself and use whatever you want.

Here is a list of Dota 2 Console Commands which had ALL the commands.

For now, I will write down below about console commands which Na’Vi Funn1k and Arteezy use during the game. I will also explain what those commands actually do and why should we use it.

Copy commands after line below.

cl_cmdrate “60” //Amount of updates sent to server per second

cl_updaterate “60” //Amount of updates received from server per second

dota_minimap_hero_size 1100 //Changes the size of heroes on the minimap

Copy till above line.

These are old commands to activate network information which Funn1k and Arteezy used. But these commands are no more required. Now in Dota 2 Reborn, you can activate it via your Dota 2 settings. Simply go to Dota 2 >> Settings >> Options >> Check show network information. See image below for easy understanding. 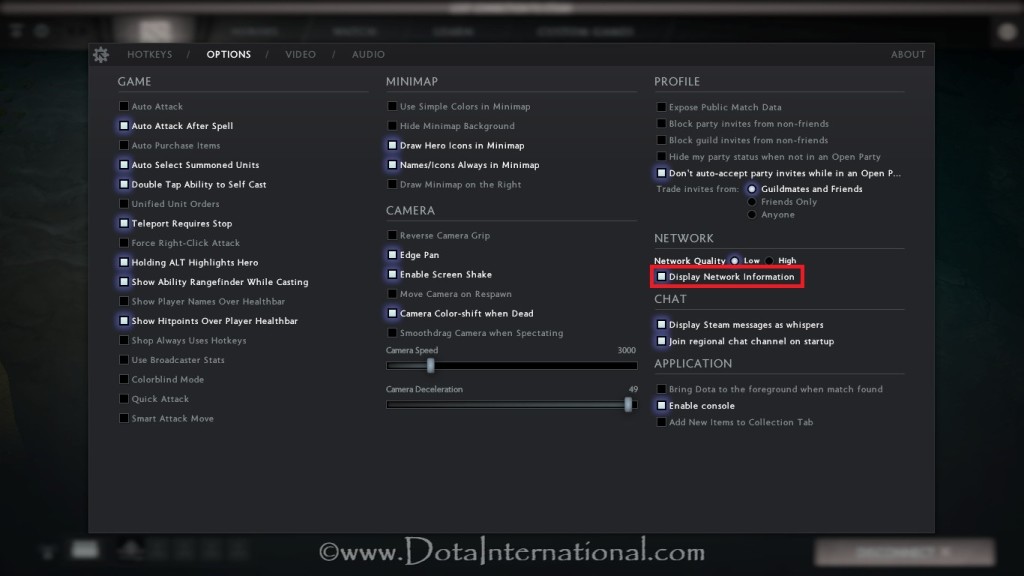 Copy commands after line below.

cl_updaterate “30” – Number of packets per second of updates you are requesting from the server.

cl_smoothtime “0” – Smooth client’s view after prediction error over this many seconds.

Copy till above line.

use the console command “dota_import_steam_inventory_layout” without quotation mark to import your Source 1 inventory placement as it is. It means, the way you placed your items in Source 1 Dota 2, will be added in your Dota 2 Reborn.

One thought on “What is Dota 2 Console and Autoexec.cfg and Best Commands”